Godine published Wesley McNair's latest book, Lovers of the Lost: New and Selected Poems in 2010 and today he's the featured poet on Brian Brodeur's site How a Poem Happens: Contemporary Poets Discuss the Making of Poems.

McNair's poem "Her Secret" from Lovers of the Lost is included (just an excerpt for you here):

Why he must cover every counter top, table 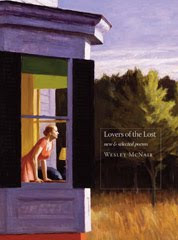 and chair with his things, she no longer asks,
knowing he will only answer as if speaking
to someone in his head who’s keeping track
of all the ways she misunderstands him

and wants to hear over and over that he’s sick
and tired, though that’s just what he is,
and how can she resent him for that? – so sick
he has pills for his bad circulation, bad heart,
and nerve disorder scattered around

the kitchen sink, so tired after staying up
all night at his computer feeding medication
to the stinging in his legs, he crashes
for one whole day into the next. "Thurman?"
she asks, coming home from work to find him

lying on their bed in his underpants, still
as the dead, his radio on to tape the talk shows
he’s missing, and then the old thought
that he really is dead comes into her mind
all over again, so strong this time she can’t

Brian also includes a great interview with McNair regarding "Her Secret." Favorite questions/answers:

Do you believe in inspiration? How much of this poem was “received” and how much was the result of sweat and tears?

My poems always begin with a feeling I want to explore. They don't begin from "out there," which is what I think of when I hear your words inspiration and received, but from inside myself, as I follow the implications of that feeling in my own emotional experience. My allies in this exploration are wonder and curiosity, the why and the how of my story. In this case, for instance, I asked myself why the wife might be having such a crisis having stayed in her marriage for forty years, and exactly how she might deal with the crisis. There were tears, yes, tears for this woman. What drove me was my compassion for her, the need I felt to give her a voice.

How did this poem arrive at its final form? Did you consciously employ any principles of technique?

I wanted long sentences that jumped across stanza divisions as if disregarding the form of the poem itself – a wildness that suggested the wife’s state of mind as well as her process of thought. The poem has twenty stanzas but only six sentences, each with a range of twists and turns. Another thing the long sentences do is to gather up the detail of the poem as it goes, throwing meaning ahead of themselves, to paraphrase Frost, so you’re always waiting for the other shoe to drop, even when the sentences end. This preserves the immediacy of the poem despite its length, or so I hope, as if it were spoken or thought in one intensified moment.
Posted by Carrie Dieringer at 2:54 PM