Barry Moser in the Boston Globe 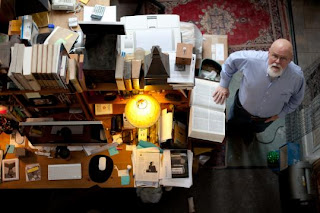 There’s a wall in Barry Moser’s office at Smith College with dozens of framed degrees and honors. At the center of the array hangs a small quote:

“God will not examine our medals and diplomas, but our scars.’’

Scars, wrinkles, furrowed brows, and other imperfections are the stuff of life for Moser, the renowned printmaker and illustrator who has worked on more than 300 books in his prolific career. His latest, “One Hundred Portraits’’ (Godine), is a collection of engravings of writers from Shakespeare to Sylvia Plath, with detours into music (Sibelius, Bukka White the bluesman) and personal subjects, such as his late parents and his beloved Rottweiler, Rosie.

On March 26 the Brandywine River Museum in Pennsylvania opens an exhibition of Moser’s work: engravings, watercolors, and limited-edition books. Given the museum’s emphasis on American illustration, it’s a feather in an already well-plumed cap. In 1983 Moser won a National Book Award for his work on “Alice’s Adventures in Wonderland,’’ and he published his own spectacular illustrated version of the King James Bible two decades later.

Not bad for a man who has come to believe he grew up dyslexic. “I’m really interested in the irony of that,’’ says Moser, 70, a bespectacled, head-shaved Tennessee native with a tangy drawl and the sculpted white beard of a 19th-century judge. “I think I largely overcame it by setting type — upside-down and backwards.’’

Read the rest of the article here.

Moser is the author of several Godine books, including his latest, One Hundred Portraits: Artists, Architects, Writers, Composers and Friends, which was published in 2010.

Posted by Carrie Dieringer at 11:05 AM