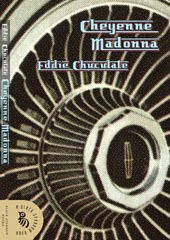 Eddie Chuculate is an American fiction writer whose stories typically feature Native American characters and culture. David R. Godine, Publisher had the privilege of publishing his debut book, Cheyenne Madonna, last year under its imprint Black Sparrow Books. This short story collection follows Jordan Coolwater, a Cheyenne Indian, throughout his life, first as a boy dealing with his family’s prejudices and alcoholism through his adult life struggling in the art industry and his marriage. These narratives depict what it means to be a Native American, from 1826 to the present-day, with gritty realism. Below, Eddie shares with us about his writing life, racism, and which NBA team will end the season on top.

Racism is a big issue you tackle in Cheyenne Madonna, with the Native American characters portrayed as both the victims and the perpetrators of racism. How does racism still affect Native Americans today?

It's a complicated issue. You find blatant racism more on the white towns just off the reservations in the north. In Oklahoma, it's a different animal. You find much more interracial activity, yet there are those ancient Indian haters that just won't go away anywhere you go.

In a recent interview with The Short Review, you said that you typically write short stories because your “temperament is more suited to the short form.” What do you like about writing short stories vs. say, a novel?

I think it all boils down to time. How much time you have to work on something. Years past, working full-time newspaper jobs, I had to squeeze in writing time around job duties, so I always tended toward something shorter, although it's certainly not easier, and doesn't always take less time. Now that I have more time to write at the Iowa Writers' Workshop, I'm working on a novel and stories. But I like the compression of short stories, where you can find novel-like arcs or experiences in, say, 20 pages.

You are currently studying for your MFA at the Iowa Writers’ Workshop, consistently ranked as the #1 MFA program in the country. How is that going?

Being at the Iowa Writers' Workshop is an honor and a blessing. More time to write. Surrounded by like-minded people. I wrote most of Cheyenne Madonna while out of academics, in the "real world," which has its advantages and disadvantages. Most people in the "real world" have no clue what you are doing, so you're pretty much stuck if you want to talk to someone about a problem you're having in your writing, or just discuss literature. I guess that's why there are book clubs, writers' groups, etc., but I never joined them. Being in the Iowa Writers' Workshop is also inspirational. Seeing all the good work being produced makes you want to get in gear. The time for excuses is over. I believe it was the British writer Samuel Butler who said, "If you really want to do something, you'll find a way. If you don't, you'll find excuses." But the Iowa workshop is great in that you're surrounded by good, promising young writers and established mentors, some of whom have won the big literary prizes. On top of that, we have great visiting writers who teach for a semester or two, and writers and poets constantly coming in to read, host workshops, visit with us. And everyone in Iowa City in general, from the cabdriver to the guy sacking groceries, has heard of the Iowa Writers' Workshop. There's the legendary indy bookstore Prairie Lights with continual readings week in and week out, and statues of writers and plaques with writers' quotes—things you don't find in a typical American city. With Dublin, Edinburgh and Melbourne, Iowa City is just one of four of UNESCO's "Cities of Literature." To earn that distinction, you must meet certain criteria, including a commitment to literature, thriving libraries, events, and history of publishing.

Two of the major characters in Cheyenne Madonna are artists. Do you paint or draw, etc.?

I don't paint or draw, but come from a family of artists. Both my uncles painted and sculpted, and my friends' father growing up was perhaps the most famous Indian artist in Oklahoma, Jerome Tiger. Then I went to school at the Institute of American Indian Arts and was surrounded by more visual artists. Every time I go back to Santa Fe I stay at my friend's stone-sculpting studio, and there's always a bunch of sculptors, painters, musicians dropping by. So even though I don't paint or draw, I often find myself among them often.

You were a newspaper sports writer for 9 years. Any early predictions for the NBA play-offs?

I like Boston going all the way this year, in five over San Antonio, but it will take them seven to get past the Heat in the East finals. I don't think Melo will help the Knicks much, in seven seasons with the Nuggets he only got past the first round once.
Posted by Staff at David R. Godine at 12:49 PM