Last Thursday, March 10th, The Baltimore Bibliophiles hosted an event for David R. Godine at the John Hopkins Club of John Hopkins University in Baltimore, Maryland. Susan Fillion, a Godine author, attended and kindly shares the evening with us now:

“It was a proverbial dark and stormy night on March 10th, 2011, when David R. Godine gave a talk to The Baltimore Bibliophiles about the history of his publishing business. Rain had been pounding down since the night before, causing road-closings and traffic jams. Nonetheless, the crowd was large and lively – serious book collectors and aficionados who all seemed to know David, either personally or professionally. The evening began with a sort of free-for-all book sale of Godine titles displayed on a large table near the bar. Drinks, cash, and books changed hands in the crowd, with David at the center, calling out, “Make me an offer –­ I’m not taking any of these books home!” 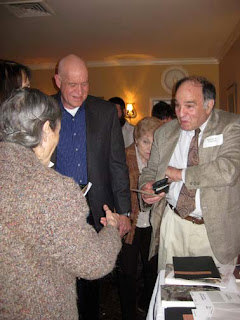 The seated dinner, old-world university club style, featured crab cakes – a local specialty. Finally, David got up to speak. For the many of you who have heard David give similar talks, you can imagine the scene – slide after slide of his exquisite books accompanied by a narrative chock full of details of his career from the very early days at Leonard Baskin’s Gehenna Press in Northampton through several current titles still in production. The crowd seemed familiar with names like Harold McGrath, Lance Hidy, Michael McCurdy, Fritz Kredel, Gillian Tyler, and seemed to take technical terms ­– such as Vandercook, Monotype Bembo, Antigone Greek, Bulmer, Centaur, Amalfi, Fabriano, and a colophon in the shape of a lobster pot – in stride. Anecdotes kept everyone chuckling . . . a recipe for brewing beer in a bathtub printed in a children’s book . . . David’s thirteen-year-old sister helping to hand-color illustrations . . . William Steig allowing Godine to print Rotten Island because he agreed to use DayGlo inks. 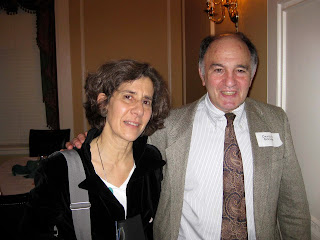 It got late. The talk was over, the tables had been cleared, a small gaggle of people followed David down to the parking lot. As I drove away, I could see him in my rear-view mirror, standing on a flat spot between enormous puddles, still chatting. He seemed to have sold every last book."

SUSAN FILLION is the author of Godine’s forthcoming book Miss Etta and Dr. Claribel: Bringing Matisse to America, due out April 2011.

Posted by Carrie Dieringer at 2:37 PM