“What takes place in our mind, in our soul, when we read a novel?” 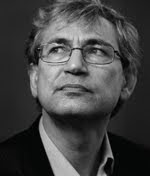 The Harvard University Press offers an excerpt today from Noble Prize-winning Turkish novelist Orhan Pamuk’s book The Naive and the Sentimental Novelist. All fans of literature will likely nod in agreement . . .

"I have been reading novels for forty years. I know there are many stances we can adopt toward the novel, many ways in which we commit our soul and mind to it, treating it lightly or seriously. And in just the same manner, I have learned by experience that there are many ways to read a novel. We read sometimes logically, sometimes with our eyes, sometimes with our imagination, sometimes with a small part of our mind, sometimes the way we want to, sometimes the way the book wants us to, and sometimes with every fiber of our being. There was a time in my youth when I completely dedicated myself to novels, reading them intently—even ecstatically. During those years, from the age of eighteen to the age of thirty (1970 to 1982), I wanted to describe what went on in my head and in my soul the way a painter depicts with precision and clarity a vivid, complicated, animated landscape filled with mountains, plains, rocks, woods, and rivers.

What takes place in our mind, in our soul, when we read a novel? How do such interior sensations differ from what we feel when we watch a film, look at a painting, or listen to a poem, even an epic poem? A novel can, from time to time, provide the same pleasures that a biography, a film, a poem, a painting, or a fairy tale provides. Yet the true, unique effect of this art is fundamentally different from that of other literary genres, film, and painting. And I can perhaps begin to show this difference by telling you about the things I used to do and the complex images awakened within me while I was passionately reading novels in my youth.

Just like the museum visitor who first and foremost wants the painting he’s gazing at to entertain his sense of sight, I used to prefer action, conflict, and richness in landscape. I enjoyed the feeling of both secretly observing an individual’s private life and exploring the dark corners of the general vista. But I don’t wish to give you the impression that the picture I held within me was always a turbulent one. When I read novels in my youth, sometimes a broad, deep, peaceful landscape would appear within me. And sometimes the lights would go out, black and white would sharpen and then separate, and the shadows would stir. Sometimes I would marvel at the feeling that the whole world was made of a quite different light. And sometimes twilight would pervade and cover everything, the whole universe would become a single emotion and a single style, and I would understand that I enjoyed this and would sense that I was reading the book for this particular atmosphere. As I was slowly drawn into the world within the novel, I would realize that the shadows of the actions I had performed before opening the pages of the novel, sitting in my family’s house in Beóiktaó in Istanbul—the glass of water I had drunk, the conversation I’d had with my mother, the thoughts which had passed through my mind, the small resentments I had harbored—were slowly fading away.

I would feel that the orange armchair I was sitting in, the stinking ashtray beside me, the carpeted room, the children playing soccer in the street yelling at each other, and the ferry whistles from afar were receding from my mind; and that a new world was revealing itself, word by word, sentence by sentence, in front of me. As I read page after page, this new world would crystallize and become clearer, just like those secret drawings which slowly appear when a reagent is poured on them; and lines, shadows, events, and protagonists would come into focus. During these opening moments, everything that delayed my entry into the world of the novel and that impeded my remembering and envisioning the characters, events, and objects would distress and annoy me. A distant relative whose degree of kinship to the real protagonist I had forgotten, the uncertain location of a drawer containing a gun, or a conversation which I understood to have a double meaning but whose second meaning I could not make out—these sorts of things would disturb me enormously. And while my eyes eagerly scanned the words, I wished, with a blend of impatience and pleasure, that everything would fall promptly into place. At such moments, all the doors of my perception would open as wide as possible, like the senses of a timid animal released into a completely alien environment, and my mind would begin to function much faster, almost in a state of panic."
Posted by Carrie Dieringer at 10:48 AM