Here's some exciting news! Georges Perec's Life A User's Manual from Godine is in the running for the "Spring Big Read" selection at Conversational Reading (Scott Esposito). Perec is up against A Naked Singularity by Sergio De La Pava and Mortals by Norman Rush. The poll is open through Saturday and you can vote here. 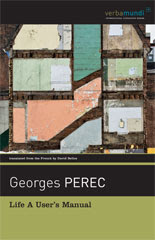 After two successful Big Reads on this site last year, it became very clear to me that part of the success was that the books we read were both excellent. They weren’t simply great books to interpret and discuss–although they certainly were that–they were also compelling, intriguing novels that really pulled a reader in and satisfied from beginning to end. When I’d reached the end of our allotted chunk for that week, I had a hard time setting them down, and I don’t think I was alone.

So with that said, I’d like you to choose carefully as you vote on this spring’s Big Read in the poll below. The three choices offered here are based on various factors, including what readers of this site seem to like, books that have been big subjects of discussion around here in both the recent and distant past, and my own idiosyncrasies.

I’m going to keep the poll open through the end of Saturday. Think carefully! Vote once. Vote well. And unless you’re really, really sure of what you want, read the matter below to help you evaluate and decide.

Georges Perec is probably the best-known, widest-praised author to come out of the best-known, widest-praised group of innovative writing in the 20th century, the much-lauded OuLiPo, the “Ouvroir de littérature potentielle” or “workshop of potential literature.” Calvino called Perec, “one of the most singular literary personalities in the world, a writer who resembled absolutely no one else.” And a young, hungry Paul Auster reviewed Life in the New York Times in 1987, writing: 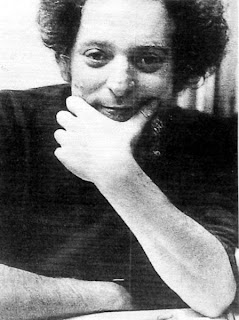 ”Life: A User’s Manual” (1978) – has at last been translated into English [and] it will be impossible for us to think of contemporary French writing in the same way again. . . . Those who have read a great deal will no doubt recognize passages that quote directly or indirectly from other writers – Kafka, Agatha Christie, Melville, Freud, Rabelais, Nabokov, Jules Verne and a host of others – but failure to recognize them should not be considered a handicap. Like Jorge Luis Borges, Georges Perec had a mind that was a storehouse of curious bits of knowledge and awesome erudition, and half the time the reader can’t be sure if he is being conned or enlightened. In the long run, it probably doesn’t matter. What draws one into this book is not Perec’s cleverness, but the deftness and clarity of his style.

Posted by Carrie Dieringer at 3:21 PM