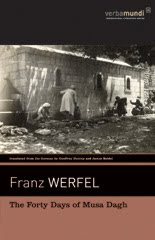 The Forty Days of Musa Dagh is Werfel’s masterpiece, the novel that brought him international acclaim in 1933 and drew the world’s attention to the Armenian Genocide. This book, long out of print in English, is now available again in Geoffrey Dunlop’s classic translation, with revisions and expansions by James Reidel.

“In every sense, a true and thrilling novel . . . It tells a story which it is almost one’s duty as an intelligent human being to read. And one’s duty here becomes one’s pleasure also.” New York Times Book Review

The second Werfel title, Pale Blue Ink in a Lady’s Hand, is published for the first time in English and translated by NEA-award-winning translator James Reidel, is a prequel to what is known as Holocaust literature. A departure from Werfel’s best-selling epic novels of the 1930s, this short novella abou 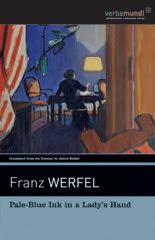 t interwar Austria is a glimpse into Werfel’s own time and milieu, a tragic love story, and an unsparing critique of the evasions and self deceptions of the Austrian bureaucracy in the final days before the Anschluss.

Josh Lambert of Tablet ("A New Read on Jewish Life") mentioned our forthcoming publication in "On the Bookshelf" yesterday:

"Franz Werfel, the expressionist playwright who attended school with Kafka in Prague, has now had his final untranslated novel rendered into English as Pale Blue Ink in a Lady’s Hand (David R. Godine). Werfel started writing this tale of a married Austrian diplomat and the Jewish girl he once loved in 1940, after anti-Semitism forced him to flee Vienna; by year’s end, he found his way to—where else?—Hollywood."
Posted by Carrie Dieringer at 9:12 AM