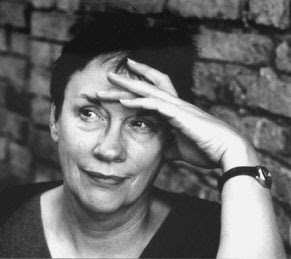 In the spring, Godine is proud to publish Ernest Hebert’s novel, Never Back Down. Hebert lives in New Hampshire and teaches writing at Dartmouth College. He is continually producing pieces for his students on the craft of fiction writing and we wanted to share an essay or two on the blog for our dear readers to enjoy.

My introduction to Annie Proulx was back in the old days when she was writing for Gray's Sporting Journal. I can't remember just what it was I read. What sticks in my mind was that the writing was alive and distinctive. Her name popped up again years later when my wife Medora took her picture for the Valley News, which serves New Hampshire and Vermont in the Hanover area. Annie had published Heart Songs, her first collection of short stories.

I knew that Proulx was a North Country writer, writing about North Country people — I knew I had to read her. I considered it part of my job to keep in touch with up country authors; it was the right thing to do. I can't say I was looking forward to the experience. I have a strong streak of pettiness and professional jealousy that I have failed to subdue over the years. A part of me would like to line up the writers in my genre against the wall and open fire. I try to hide these evil feelings behind a facade of good cheer, openness, and generosity. I'm such a phony, but in your own way so are you, dear fellow writer, so are you. It's okay. Nurture your sins, rejoice in them. Without sin we would have nothing to write about; without sinners we would have no interesting characters; without sinning ourselves we wouldn't know how accurately to portray real life. I would read Heart Songs out of a sense of obligation to my career, but I didn't have to like it, nor its author.

Everything changed in five minutes after I opened the pages of Heart Songs. The stories were original and powerful, the characters realistic, but what touched me, took hold of me, and turned me upside down was Proulx's voice, its ability to excite the mind and heart with language: [She was] "thin as a folded dollar bill, her hand as narrow and cold as a trout." After an hour with Heart Songs I was a changed man. That nasty, petty little demon ran scared out of my heart back into the bowels where he belonged. This is what great writing does for readers. It brings out our better nature. It gives us hope in our species. It inspires us to rise above our frailties. What great writing does for writers is to raise our standards at the same time that it gives us confidence to go on with our work.

Some of the downside of the writing life (like the actor's life or the painter's life) is that sometimes you wonder if it ever amounts to anything. I mean if a plumber comes to my house and fixes my toilet it's undeniable that his work has amounted to something. But if I go to the plumber's house and leave a haiku on his kitchen table, whether my work has amounted to anything remains forever debatable. Thank you, Annie Proulx. You made me proud to be a writer. In a time when I weakened you sent me back to the word processor in search of . . . what? Well, I'm not sure exactly, but it has something to do with my attempts to provoke in others that soaring feeling of humanity that you brought out in me.

Annie is long gone from New England. My guess is I'll never see her again. What I will remember about her as a person will be an incident that summarized what I most admired about her, her fearlessness. She had just won the National Book Award and the Pulitzer Prize for her novel The Shipping News. She was not only coming into her own at an age some writers are finished, she was making good money for the first time in her life. The result was she was selling her house in Vershire, Vermont, and starting elsewhere.

I dropped by to visit her and found her on the roof fixing some shingles, I think. The house was built on the side of a hill so that the rickety ladder went up three stories. Annie was half up the roof when she spotted me — and slipped. I watched in horror as she slid down the roof. One foot caught the top rung of the ladder and pushed the ladder outward. I thought the ladder might fall over. Annie barely clung to the roof with her hands while the ladder wavered under her foot until she was able to bring it back into position. She climbed down the ladder, greeted me as if nothing had happened. Annie Proulx is the kind of person you'd want by your side if you had to go to war.
Posted by Carrie Dieringer at 10:08 AM