Godine had great luck with The Boston Globe this weekend: 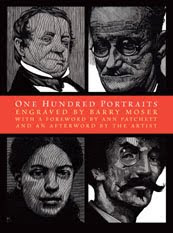 In a career that has spanned 40 years, Barry Moser has illustrated 200 books, among them editions of Lewis Carroll’s “Alice’s Adventures in Wonderland’’ and the King James Bible. Long interested in the character of creators, be they writers, artists, or composers, Moser once told an interviewer, “The human face is almost as individual as a fingerprint. It fascinates me to no end.’’

Moser’s new book “One Hundred Portraits’’ (Godine) gathers a cast of characters through the ages, with an emphasis on British and American notables. Moser, who lives in Western Massachusetts, works with darkness, light, and lines to achieve faces that carry a sense of life’s burdens and beauties as his subjects lived them. Ann Patchett writes in the foreword that she welcomes Moser’s portraits of novelists as an opportunity to learn more about the souls that animate their works.
—Jan Gardner 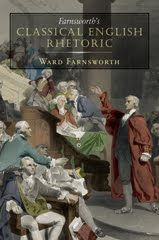 To those of us who haven’t studied rhetoric — that is, pretty much all of us — its workings are largely invisible. So we are lucky to have Ward Farnsworth’s wonderful new book, “Farnsworth’s Classical English Rhetoric,” to explain the notion and rescue it from total disrepute. Farnsworth, a professor of law at Boston University, fell in love with rhetoric as a student of Latin, and realized that tools for writing and speaking effectively were of great value to the students he was training to be lawyers.

Out of the hundreds of figures of speech known to the ancients, Farnsworth has pulled just 18, the ones that he considers to be most useful for modern speakers and writers. Their names can be daunting — epizeuxis, symploce, polysyndeton, aposiopesis — but Farnsworth sorts them into handy categories and gives examples of their use, not from Roman authors dead and gone for centuries, but from the great writers of English from about 1600, the time of the King James Bible, to 1950. (Farnsworth stops in 1950, he explains, because “the authors and statesmen of those earlier periods studied rhetoric more closely than it tends to be studied today.”)

His practitioners are not only notably skilled, but also notably entertaining, which makes “Farnsworth’s Classical English Rhetoric” as much an enjoyable read as an educational manual.
—Erin McKean
Posted by Carrie Dieringer at 10:07 AM