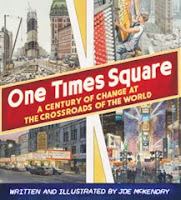 Author and illustrator Joe McKendry's latest book (for ages 10 and up), One Times Square: A Century of Change at the Crossroads of the World, combines the riveting history of this fascinating intersection with lush and revealing illustrations. We were thrilled to be able to bring finished copies to BEA with us and Publishers Weekly has featured the book in a recent roundup:

"In the spirit of his 2005 picture book, Beneath the Streets of Boston: Building America’s First Subway, author-illustrator Joe McKendry turns to New York City for One Times Square: A Century of Change at the Crossroads of the World (David R. Godine, Sept.). Godine’s marketing director Sue Berger Ramin gave word of plans for a major launch at the Times Square Experience, and is working on programming at the Museum of the City of New York and the New York Public Library."

Here's a sneak peak at a few of the incredible illustrations:

Posted by Carrie Dieringer at 10:01 AM