"The Best Holocaust Novel Ever" 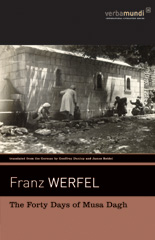 Tablet Magazine ("A New Read on Jewish Life") has just named Godine's new translation of Franz Werfel's classic The Forty Days of Musa Dagh, about the Armenian Genocide, "The Best Holocaust Novel Ever".

From the piece by Liel Leibovitz:


More, perhaps, than any other writer in recent memory, God and the Devil seemed to have jointly guided Franz Werfel’s life. The former gave him a keen eye and a tremendous sense of style, driving his dear friend Kafka, Prague’s other famous native Franz, to state that when he read Werfel’s first collection of poems, “I was going off my head with enthusiasm.” The latter cursed him with a sulfurous personality that led him to betray friends, abandon ideologies, denounce his Judaism, reject his family, marry the blatantly anti-Semitic Alma Mahler, seek to sidle up to the Nazis, and, only when the jackboots came too close, flee to Hollywood and write silly screenplays until his early death. But all of Werfel’s sad apostasy is dwarfed by his singular achievement, The Forty Days of Musa Dagh, a novel about the Armenian holocaust that Werfel wrote in 1933 and that is available now in a new English-language translation from the publishing house of David R. Godine. In nearly 1,000 pages, it tells an adventure story of Armenian partisans fending off the Turks, but it also delivers a stunning breadth of Armenian folklore, history, language, customs, and politics. The Nazis, freshly in power in Berlin, were quick to grasp that the book wasn’t only a work of historical fiction about one genocide but also a clear allegory about the impending murder of the Jews, which would soon cause Werfel to flee Europe for America.

Musa Dagh is, to the contemporary reader, a curious book. At times it reads like one of those Karl May adventure tales for boys Werfel adored as a child, with fast-paced scenes of battles and bravery under fire. At others, it slows down and devotes long passages to detailed ethnographic descriptions of Armenian mourning customs or the traditions of village life. Its protagonist is Gabriel Bagradian, an Armenian who had left his community, moved to Paris, and married an elegant French woman who was not altogether pleased with her husband’s ethnicity; he, in other words, is Werfel himself. The author also cast many of his family members and old friends from Prague as villagers with whom Bagradian, visiting his native country on vacation with his wife and son, reconnects. Surrounding these fictional manifestations are historical figures: Djemal Pasha, Enver Pasha, and Talaat Pasha, the leaders of the Young Turks Revolution, make an appearance, as does Johannes Lepsius, a real-life German missionary on whose historical accounts of the Armenian massacre Werfel strongly relied.

Werfel died as he had lived, on the cusp between cultures, religions, and ideologies, a human seismograph registering the turbulence that devastated his continent and his people. We should remember him for exploring, in his life as well as in his art, the full register of human emotions, from the merciless to the sublime. Most of all, we should remember him for Musa Dagh, his sadly forgotten work of genius. And we should see book and author alike as an omen, warning us that as history’s travesties are being written as novels, they are frequently also reborn as news.

Posted by Carrie Dieringer at 9:52 AM