Karsh: Beyond the Camera 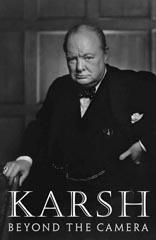 Godine’s latest photography book, Karsh: Beyond the Camera, is particularly special to us, not to mention gorgeous. The book attempts to offer new perspective on the great photographer, Yousuf Karsh. In 1988, Jerry Fielder, then Karsh's long-time studio assistant and currently Director of the Karsh Estate, sat down with the master photographer and taped over nine hours of recollections of the many portrait sessions Karsh had experienced in his great career. This recording has never before been made available.

Author David Travis, former Curator of Photography at the Art Institute of Chicago, arranged the photographs in the book, presents Karsh’s commentary from the 1988 recordings and other sources, and then expands and situates these thoughts. The result is the chilling feeling you’ve just spoken with some of the most iconic figures of the century. You come away with little bits of their personality, fueled by anecdotes and impressions.

This might be because portraiture is a fascinating and unique medium, wrought with a fluidity I think Richard Brilliant explains best in his book, Portraiture: “ . . . the oscillation between art object and human subject, represented so personally, is what give portraits their extraordinary grasp on our imagination.” What’s particularly interesting is that Karsh’s subjects are people that we’re all superficially familiar with. And, like with modern celebrities, we create a certain relationship based on our own perception. To view these photographs then brings us closer to the subjects in a new way, and creates a certain dialogue and intimacy. My favorite part of sitting down with the book was reading the accompanying text from Karsh and Travis, and learning, for example, that the Hemingway photo wasn’t just a “blank face,” but rather a man concealing his physical pain. The text helps us move the images from art to person, as Brilliant put it.

[Hemingway is] an adventurous man, a man of great ability in writing. He’s loved for the safari in Africa, his courage in the bull ring, yet he was very shy. In retrospect, I feel that this was after [a] second major airplane crash in Africa. When I photographed him, his back was in agony. He could not walk comfortably. And consequently, the shyness he exhibited – I had to work with him alone, asking Mary, his wife, to leave the room [and] my assistant – was merely that the giant of Hemingway’s caliber did not wish to exhibit any experience of agony and physical pain. And this was where my experience was reinforced that he was the shyest man I have ever photographed.
—Karsh (interview with Don Michel, December 1974, audio cassette)

This portrait of Hemingway, dressed in a sweater suitable for chilly days, was taken in the writer’s villa in tropical Cuba. There are other contradictions in the picture. One critic wrote that there is nothing in this photograph that teaches us about Hemingway as a writer or as a man. Is it just a big blank face? If so, perhaps it is because we have left the work of the photographer unfinished. Once we learn that Hemingway did not want to reveal his pain, the portrait becomes magnificently stoic. In this moment of equilibrium, free of dramatic flair, viewers can fit facts about the author into the accommodating receptacle of his countenance. One imagines his injuries from driving ambulances in the First World War or the recent lacerations and burns of the airplane crash left their mark both physically and psychologically.
—Travis

But the most unique part of this book is what we learn about Karsh. He rarely revealed his personal thoughts about any of his portrait sessions. To quote the preface: “His voice invites us to try to fathom the photographer’s psyche and conjecture how he thinks and how he feels.”

One of my favorite images is that of Helen Keller. Considering she’s posing for a medium she can never consume, it feels a bit special to see her featured. Notice how her hands are held at the same level as her face. For Keller, these hands gave her everything, and like the way we view a face, she relied on her hands to distinguish people.

Don Michals: So many of your people have been applauded for their achievements, but of all of them, who would you say had the greatest spirit? Karsh: Helen Keller. And I was fortunate enough as part of my homework to have met and known and photographed Catherine Cornell and Martha Graham. [At a lunch together] they assured me that they would arrange for me to photograph her. But they also prepared me emotionally that as you meet this wonderful woman she will place her fingers on your lips and on the chord of your speech. In essence she photographs you in her mind.
—Karsh (interview with Don Michel, December 1974, audio cassette)

Another great one is the photo of H. G. Wells. His stance and upheld head makes me smile. And I like the anecdote of how we pushed chairs in front of objets d’art to protect them from bomb blasts. The man had taste.

This was the way Wells greeted me: “I hear that you have been photographing Shaw. It’s a great mistake. When future generations go through the ruins of London, they will find Shaw, more Shaw, and still more Shaw photographs, and the unfortunate thing is that they will take him to be the typical Englishman.” I smiled. “There’s nothing funny about it,” said H.G. “It’s horrible and true.” I hastened to explain ... his remark reminded me of two American radio comedians, Fred Allen and Jack Benny. “I know them,” retorted Mr. Wells, “and don’t imagine they originated public feuding. Shaw and I have been at it almost fifty years.”
—Karsh (Faces of Destiny, p.154)

Karsh was busy during his two-month stay in London, running from suburb to city center photographing sixty military, political, and cultural leaders. In H.G.Wells’s apartment in Woking, he found the chairs in the drawing room had been pushed in front of objets d’art to protect them from aerial bomb blasts.
—Travis

But perhaps the most interesting photo (though not without the text from Karsh) was of Vladimir Nabokov:

Of his satire on American values, Lolita, he drolly commented, “I know the American woman very well. When I was a butterfly scientist I taught many of them during their crucial years in college.”
Nabokov is a brilliant writer, and [a] prolific writer. As a human being, he left much to be desired. He is among the least attractive men I have ever photographed. His manners, his thinking, his arrogance, his false behavior [were objectionable to me].
—Karsh (A Sixty-Year Retrospective, p.34; interviews with Jerry Fielder, August and September 1988, audio cassette, Yousuf Karsh Estate)

No trace of Karsh’s negative opinion of Nabokov shows in this portrait. One reason may be that such traits remained masked during the session. But knowing that highly skilled portrait photographers can find subtle “tells” in the face – like poker players do – and coax them onto film, one is left to assume that Karsh was not in the business of making such exposés in his photographs. He endeavored to discover a positive aspect in each of his subjects. It was a kindness of sorts and part of Karsh’s
life-long habit of not acting on dislike or hatred. One can find Karsh portraits that are unsuccessful, but none that are mean-spirited or cynical.
—Travis

Posted by Carrie Dieringer at 1:15 PM