The Heady Sweet Scent of Maple

Nan Parson Rossiter is the author and illustrator of
Godine's 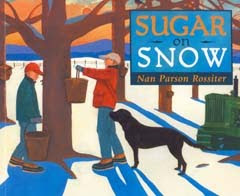 forthcoming paperback edition of Sugar on Snow. This lovely picture book will be available starting in early March. In the story, a father, his two sons, and one dog rise (very early) to the occasion and set off at dawn to the sugar bush to begin the maple sugaring process. We see the entire family involved – Mom preparing the meals, Dad steering the big John Deere tractor through the fields, and the two sons, Seth and Ethan, learning how to steer, collecting the buckets, and replacing them on the spouts and, of course, the loyal hound Chloe (probably the only dog so named on any farm in New England) trotting along for the ride.

Today Nan shares a wonderful essay on maple sugaring for our dear readers to enjoy. I guarantee that after reading this you'll want to head out to the closest maple sugaring shack (if you're lucky enough to be within driving distance of one!).

“How does a man know when to set his spiles?

. . . He sees the winter robins venturing out more often into his pastureland . . . he sees the faint amber glow in the willow tips, and he sees a subtle livening in the red osier stems. He has seen the grouse come down to his apple trees for a taste of apple buds, and though he can’t see the change he knows those buds must have begun to swell . . .

So he sets his first few spiles, and a few mild days and frosty nights start the sap dripping. When the sap rises you can begin to count the days till spring. Winter isn’t over, but its days now are numbered.” 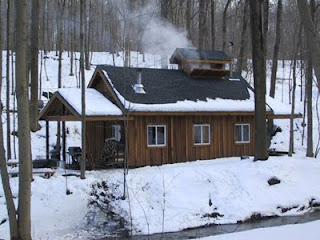 This is one of many wonderful observations written, long ago, by New York Times nature editorialist, Hal Borland. The countryman, who is often referred to in Borland’s prose, has a keen sensitivity to nature . . . to shadow and light . . . and to the slow, deliberate change of the seasons. And at this time of year, Borland’s timeless words warm the winter weary heart!

It is indeed almost sugaring season in these parts, and there’s not a yummier reason on earth to corral the kids and head north. Sugar houses are scattered all across the New England states, as well as in upstate New York. With a little bit of online research, it’s very easy to find a destination. Maple festivals and open houses abound, especially as we draw closer to March. 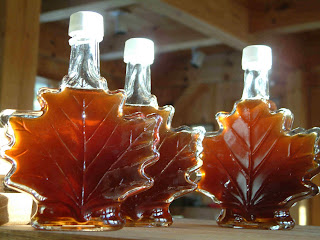 Some sugar houses are off the beaten path, but one sure sign that you’re on the right road will be when a youngster, keeping attentive watch from the back seat, exclaims, “There are buckets on the trees . . . ” Another telltale sign will be the huge plumes of steam billowing into the air. So, when you step out of the car, prepare to be seduced by the heady sweet scent of maple. (And hopefully you’ve worn boots because March is also mud season!)

Once inside the sugar house, history is shared and lessons are unwittingly learned . . . just by standing near the tremendous evaporator, listening to the stories, and watching the sap slowly cook down. The youngsters will be amazed to find out just how many gallons of the clear, watery liquid it takes to make one gallon of syrup.

For some in the family, the best part of the trip will be the gift shop where temptations abound: samples of syrup, sugar on snow, maple candy, and maple soft serve ice cream . . . Yum! But, most importantly, don’t forget to bring home some real maple syrup to have on pancakes that night!

Who knows? This great family adventure might turn out to be a favorite family tradition!