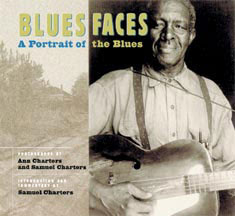 Today I picked up a copy of Godine's book Blues Faces: A Portrait of the Blues by Samuel and Ann Charters. Flipping through the pages, I was impressed by the history and stories behind some of the genre's iconic and influential musicians. The photographic portraits that illustrate the book helped me connect to artists like Muddy Waters (whose name I knew) while also introducing me to the likes of Bukka White (whom I didn't know). I have not listened to a great deal of the blues, but a description that read "With the first line of his blues there was the unmistakable falsetto voice and the subtly intricate guitar accompaniment that had set an indelible mark on his first recordings" caught my attention.

A few clicks later, I was watching this clip of Skip James from 1967:

And now, before I sign off to listen to some Willie Dixon, a quick, entertaining story about Buddy Guy:

"One night when I was watching Buddy at the Fillmore he jumped down off the stage to do his variation of the old theatre routine. His specialty was to go out into the crowd playing his guitar, while the band on the stage kept playing the riff behind him until he climbed back up to join them. But for this show . . . when he got to the end of the long guitar cord that plugged him back in to the amplifier on stage, he handed the guitar to three or four people who were sitting in the middle of the dance floor. Instead of playing he kept on through the crowd singing his blues over and over while the band kept pumping out the chords for him on stage . . . He went on singing and working his way through the entire building . . . When Buddy finally got back to the dance floor, a little hoarse by now and wringing wet with perspiration, most of the crowd had gathered around the group in the middle of the floor where he had dropped his guitar. Without noticing what he was doing, Buddy had handed it to Elvin Bishop, guitarist with the Paul Butterfield Blues Band. After a few choruses Elvin started to play, and now Buddy couldn't get through the crowd to get the guitar back . . . When he caught his breath he had to ask nervously for whoever was playing his guitar to please bring it back to him."
Posted by Staff at David R. Godine at 9:49 AM