Swimmer in the Secret Sea 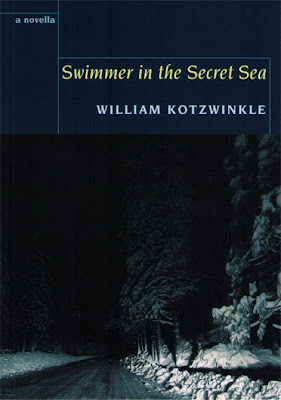 Thank you to the literary review site The Mookse and the Gripes for this thoughtful, beautiful review of William Kotzwinkle's Swimmer in the Secret Sea.

"I’ve had my eye on Swimmer in the Secret Sea (1975) since I read about it earlier this year and saw that it was published by Godine, one of my favorite publishers . . . This short book (just under 100 pages of generously large type and margins) was originally published in Redbook, but in the same year it was published as a paperback. I believe it is a rare thing for a magazine short story to find its way into its own cover. To remain in print through the years is also quite a feat. Off the top of my head, I can think of only one other that has similar success: Cynthia Ozick’s The Shawl (and even it is actually two stories).

The book’s strength is the simple story, the seemingly simple way it is told, and the cold landscape that all at once emphasizes the book’s tragedy and its hope. The anxiety and the calm, a landscape that is both lonely and comforting, a child that never arrived but is deeply missed, tragedy and hope — or is there really any hope at all here? Such contradictions give the simplicity a full range of emotion. Another strength: the book’s ability to make the reader question any warmth he or she may be feeling."

Posted by Carrie Dieringer at 1:39 PM