Elizabeth David - How to Keep It Simple at Christmas 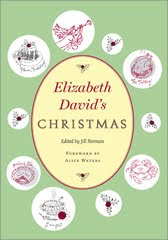 Johnny Grey Studios has posted an excerpt from Godine's Elizabeth David's Christmas (Foreword by Alice Waters). Here’s Elizabeth’s take on how to keep it simple at Christmas:

"If I had my way – and I shan’t – my Christmas Day eating and cooking would consist of an omelet and cold ham and a nice bottle of wine at lunchtime, and a smoked salmon sandwich with a glass of champagne on a tray in bed in the evening. This lovely, selfish, anti-gorging, un-Christmas dream of hospitality, either given or taken, must be shared by thousands of women who know it’s all Lombard Street to a China orange that they’ll spend both Christmas Eve and Christmas morning peeling, chopping, mixing, boiling, roasting, steaming. That they will eat and drink too much, that someone will say the turkey isn’t as good as last year, or discover that the rum for the pudding has been forgotten, that by the time lunch has been washed up and put away it’ll be teatime, not to say drink or dinner time, and tomorrow it’s the weekend, at it’s going to start all over again. 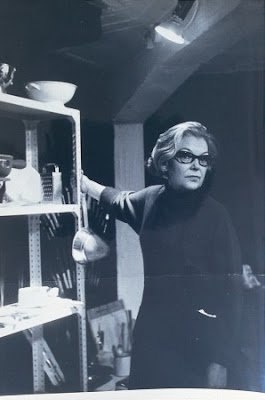 Well, I know that any woman who has to provide for a lot of children or a big family has no alternative. This grisly orgy of spending and cooking and anxiety has to be faced. We are so many fathoms deep in custom and tradition and sentiment over Christmas; we have gotten so far, with our obsessive present-buying and frenzied cooking, from the spirit of a simple Christian festival, that only the most determined of Scrooges can actually turn their faces to the wall and ignore the whole thing when the time comes. At the same time, there must be quite a few small families, couples without children, and people living along, who like to celebrate Christmas in a reasonably modest and civilized way: inviting over a friend or two who might otherwise be alone (well, maybe, like you and me, they’d rather be alone, but this is an eccentricity not accepted at Christmas time) – and for much small-scale Christmas meals, at least, the shopping and cooking marathons can be avoided, the host and hostess can be allowed to enjoy themselves, and the guests needn’t have guilt about the washing up.

For such a meal, I’d make the main dish something fairly straightforward and conventional, the color and festive look being supplied by something bright and beautiful as a garnish. Not inedible decorations, but something simple and unexpected such as a big bowl of crimson sweet-sour cherry sauce with a roast duck; a handsome dish of tomatoes stuffed with savory rice with a capon; a Madeira and truffle-scented sauce with a piece of plain roast beef; slice oranges with a pork roast or a ham.

The first course I’d make as painless as possible for the cook: if money were no object, lots of smoked salmon or Parma ham to precede the duck; before the beef, a French duck pate with truffles and pistachio nuts, avocado pears, or simply a lovely dish of egg or prawn mayonnaise. Or, if you’d cooked a ham or piece of gammon or pickled pork to last over the Christmas holiday, then a few finely carved slices of that, with a bowl of cubed honeydew melon or some pickled peaches – there’s no reason why English cooked ham should not make just as good a first course as the raw Parma or Bayonne ham.

As for pudding, unless you feel you absolutely have to have at least the traditional mince pies (those who only each the Christmas pudding because of the brandy or rum butter will find it equally delicious with mince pies), most people will be grateful if you skip straight to the Christmas dessert fruits. Usually one is too full to appreciate the charms of Malaga raisins, Smyrna figs, almonds, glacé apricots and sugar-plums, or you could perhaps finish up with a big bowl of mixed fresh pineapple and sliced oranges."

"If we were to bushwack our way back to the true source of modern American food culture, we would find that it is not Julia Child, but Elizabeth David. [Her] recipes are all charm."
— The New Yorker

Posted by Carrie Dieringer at 10:15 AM