Omniphagous a. Eating everything. One of the great experimental omniphages was William Buckland, the first Professor of Geology at Oxford University. He ate hedgehog, crocodile and mole meat, and even a bluebottle fly, the taste of which he considered the most repulsive he had ever experienced. Once when lost on a dark night during a ride to London with a friend, he dismounted, scooped up a handful of earth, smelt it, and immediately declared "Uxbridge!" The Archbishop of York once proudly showed Buckland a snuff box containing the heart of Louis XIV, which the Archbishop had brought from a tomb-robber when in Paris during the revolution. Remarking "I've eaten many things, but never the heart of the king," Buckland seized the heart and swallowed it on the spot. 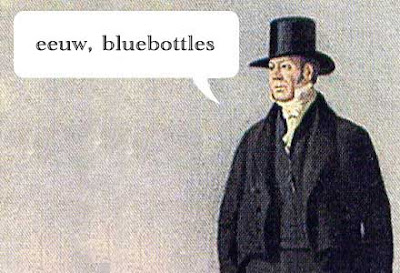 Each Tuesday, we’ll offer up a Superior Word for the edification of our Superior Readers, via the volumes of the inimitable Peter Bowler. You can purchase all or any of the four Superior Person’s Books of Words from the Godine website. Omniphagous appears in the Third.
Posted by Carrie Dieringer at 4:01 PM