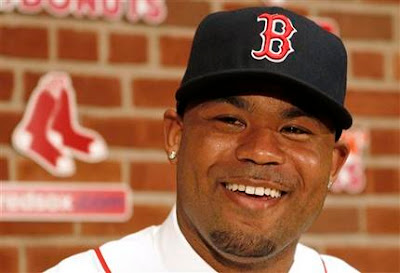 On Tuesday, baseball bloggers and book lovers around Twitter enthusiastically circulated the news that newly minted Red Sox outfielder Carl Crawford was planning to open an antiquarian bookshop in the Boston area. The former Tampa Bay Ray was said to be both a rare book collector and a fan of early American writings, including William Bradford's "Of Plymouth Plantation" and "The Puritan Origins of the American Self."

Alas, this was not the case.

Crawford is very good at baseball — he just signed a $142-million contract — and was also such a good high school football player that he'd been recruited by college programs. But he's not the type to be seen "wearing a heavy fisherman's sweater and clutching a newly purchased diary of 1655 Connecticut Governor Thomas Welles," as blogger Will McDonald wrote on Royals Review, a fan-centric site dedicated to the Kansas City baseball team that is under the AP's SB Nation umbrella.

McDonald confirmed by e-mail that his post was satire.

That's not how the Harvard Bookstore saw it. Located in Cambridge, Mass. (though unaffiliated with the university, the bookstore responded to the idea that the Red Sox had just brought on a very literary player. "File this under 'amazing,' " the store tweeted, with a link to McDonald's story. "Holy cow!" added Massachusetts-based book blogger Megan Sullivan when she retweeted it.

Then the story went viral on Twitter. I was among those contaminated (I'm a Dodger fan, but I'm fond of the Red Sox too). Boston360, book journalist Sarah Weinman, author Julie Klam and publisher Norton Critical Editions were among the hundreds eager to spread the word. Sadly, the story wasn't true. Crawford is not a rare book collector, and it has not been his dream to open an antiquarian book shop.

"It was intended to be a joke," McDonald said in an e-mail, "though I wish it was true."

Strangley, at 6 p.m. Tueday, Crawford promised — or joked? — that McDonald's wish might become a reality. Responding to the flood of positive tweets to the (satiric) antiquarian bookseller announcement, the baseball star tweeted, "Yes for those asking, I am going to open a bookstore" from his verified Twitter account. "Details to come."

Posted by Carrie Dieringer at 11:16 AM