A recap of Godine at the Grolier Club in NYC 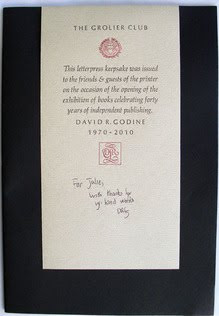 The blog of the Graphic Arts Collection at Princeton University offers a lovely post on David Godine's opening night event for the exhibition of his books at The Grolier Club in New York City:

"'It began in a barn with one press and three smart people,' said the fine press publisher David Godine last night at the opening of an exhibition of his books held at the Grolier Club in New York City. While still in his early twenties, Godine rented an abandoned cow barn in Brookline, Massachusetts, for the price of one book a year. 1968 and 1969 were spent fitting it out with the basics—electricity, heat, and plumbing—before he, Lance Hidy, and Martha Rockwell could begin production.

David R. Godine Inc. had three basic guidelines: to offer a wide selection of books of editorial and textual importance; to produce books that delighted the eye and did not offend the purse; and to maintain the highest production standards.

One of their most ambitious early projects was Specimen Days by Walt Whitman (1819-1892). Because of the large edition size, the book was set at Stinehour Press and printed by Meriden Press. 'We would be the architects, but not necessarily the builders,' writes Godine. A three-page rave review in the New York Times Sunday Book Review assured the book’s success. 'The next day Richard Abel called from Oregon to order five hundred copies. We had never shipped more than three copies of anything to anyone in our history.' (GAX Oversize 2007-0365Q) 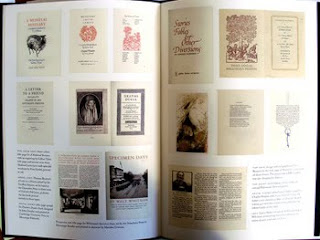 I am one of the fortunate few who walked away last night with a copy of the keepsake Godine wrote and printed for the occasion: 'David Godine: the Letterpress Years: Offprint from Matrix 29.'"
Posted by Carrie Dieringer at 12:52 PM