Ni Hao is Chinese for Hello

I’ve just returned from three weeks in China and am bursting with reactions, memories, advice, and mostly, encouragement. Go! That’s the first piece of advice — don’t hesitate to travel to China on your own. The days of being unable to manage China as an independent traveler are long gone. English is used in the subways of the large cities. Hotels are full of helpful, young staff people with college degrees in English literature. Drivers and guides-for-the-day (again, twenty-somethings with English lit degrees) are plentiful, cheerful, and affordable. Menus have pictures. ATMs are plentiful in the big cities.

I traveled with my husband and another couple. We did our homework ahead of time and made all our hotel and flight reservations in advance. Overall, we spent four days each in Beijing and Shanghai, then two or three days each in Hangzhou, Kunming, Lijiang, and Shangri-La.
Yes, Shangri-La — a small but growing town at the 10,500 foot level in the Himalayas on the far southwestern edge of Yunnan province, near Tibet and Burma. It’s an ethnic Tibetan community whose village fathers were savvy enough to change their name to draw the tourist trade. Today it’s a fascinating mix of subsistence farms (mostly barley and turnips), no plumbing, arranged marriages, hundreds of prayer flags, free-ranging livestock on the outskirts, and, in town, there’s an airport, broad, new (mostly empty) boulevards, new schools, electric plants, hotels, and car dealerships.

China faces enormous challenges, and its government is doing some things right and some things wrong. As in any country, there’s a disconnect between the politics and the people. China may have a totalitarian government, but it also has 1.3 billion people with a 5,000 year history who now, for the first time, have access to electricity and education.

The country is far too large for generalities. It would be like saying you know America because you’ve seen New York and Disney World. But here are a couple of quickies: We saw many Buddhist temples, all in daily use. We saw many statues of Mao. We visited artists and painters who are pushing boundaries with modern depictions of China’s worst environmental and human rights abuses. We ate terrific food every single day. They really do dance and do tai chi in the public parks. The air quality in Beijing is abysmal — the sun was always reddish and I doubt anyone ever saw the moon. We had guides in Yunnan point out “the most polluted lake in China” and various paintings and sculptures “damaged in the Cultural Revolution.” Shanghai is a global city with every high-end European retailer present and accounted for. You can’t drink the tap water anywhere. All of China is one time zone. Handpainted Chinese calligraphy is ethereally beautiful.

Besides the usual guidebooks, I read several excellent books to prepare for the trip. Nien Cheng’s gripping Life and Death in Shanghai, Anchee Min’s more literary but less informative Red Azalea, Peter Hessler’s wonderfully paradoxical River Town, and John Pomfret’s insightful Chinese Lessons were the best. All but Hessler’s book center on the Cultural Revolution and what it did to those who survived and those who did not.

Here’s a picture of part of the Forbidden Palace in Beijing at about 3 pm. See what I mean about the air pollution? 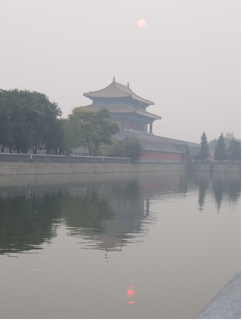 And here’s Jade Dragon Snow Mountain from Lijiang. So quiet and beautiful! 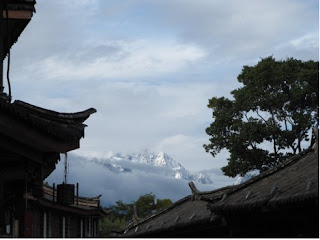 Posted by Carrie Dieringer at 12:14 PM