In the Wake of Godzilla

[Photos from Along the Highway Adjacent to Gloucester Crossing]

For readers who are unfamiliar with the landscape and day to-day affairs of Gloucester, Gloucester Crossing is a newly built shopping mall located on the grounds of a formerly fully functioning neighborhood elementary school. The shops are scheduled to open later this year. When I write formerly fully functioning elementary school, I mean to say that the Fuller School was shuttered at the onset of the development, staff laid-off, and students relocated. Subsequently the grounds surrounding the school, including the ballpark and vernal pond, were clear-cut. Despite repeated assurances from the developer Sam Park that the vernal pond would be protected (see videos), it was not. Despite the full knowledge that the developer was not in compliance with, and his complete disregard of, the agreed-upon terms of development, Sam Parks and DeMoulas (Market Basket chain of supermarkets) were given two million dollars in tax-increment-financing, or TIF, further unfairly crippling local businesses.

Perhaps you have a “Gloucester Crossing” in your neighborhood. I think I speak for the majority when saying we all basically desire the same thing for towns and cities — that our local businesses and industry be allowed to grow and thrive — creating a mutually beneficial relationship between citizen and business. Local industries, such as fishing and tourism are the lifeblood of Gloucester. Destroying the natural beauty of Gloucester in the name of creating low-paying jobs (part of the TIF agreement) destroys the very thing that draws people to our city — an extremely shortsighted form of development.

I am sickened by feelings of powerlessness against rapacious developers who defile our community. Not only was it heartbreaking to witness the annihilation of the vernal pond, surrounding tree cover, and ballpark, but also the wholesale demolition of the granite outcropping that formerly ran adjacent to the last leg of Route 128. Created over millennia — rife with native plants and wildlife — now only a pile of rubble.

There are many in our community who bravely fought the developer. They won the first round against Park’s bullying self-serving insistence that a traffic light on Route 128 be installed to serve his customers (with the potential to create the worst traffic jams imaginable). As the developers are circling round the harbor front, it is very clear that there needs to be in place a system of checks and balances that offers incentives to those who consider the environmental impact as well as the aesthetics of future developments, and adhere to the agreed upon terms. Gloucester is a perpetually cash-strapped small city, which places us in a very vulnerable position. I don’t see the good folks of Manchester, Essex, and Rockport tolerating this kind of in-your-face-destruction. Is it because Gloucester is that much poorer, or is it because we citizens, through our elected officials, lack the political will to legislate against and to prevent this kind of abuse?

Boycotting works. Did we need a fourth supermarket within a one-mile 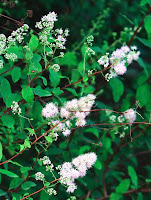 radius? Did we need another Marshall’s and Staples, particularly since both businesses already have branches that are within a half hour drive? A friend said, “what does it matter, what’s done is done, and nothing can change that fact.” Yes, that is true, but this is a teaching moment for all of us who care about the natural beauty and community development of Cape Ann. Fishermen and artist, restaurateur and patron, Varian engineer and organ builder, innkeeper and guest, elected official and voter, rich and poor, year round and summer resident, entrepreneur and blue collar worker, white collar and green collar, we all have to join forces and work together to preserve our natural resources and shape future development. The alarm has sounded and we now have a visual, daily reminder of the face of unbridled, pernicious development.

The photos taken only a few days ago show the granite outcropping before and after it was demolished. The flora is native spiraea (Spiraea latifolia), a caterpillar host plant for the female Summer Azure butterfly, found dead at the blasting site.

[Kim Smith is the author of Oh Garden of Fresh Possibilities! Available now from David R. Godine, Publisher.]
Posted by Daniel Pritchard at 10:29 AM