What is going on? Look closely at the photograph and you will see the smaller bird is feeding the much larger bird. The plumage of juvenile birds often differs strikingly from that of their parents, but that is not the case here. The bird in the foreground is an adult Song Sparrow (Melospiza melodia) and the bird it is feeding is an entirely separate species, a Brown-headed Cowbird (Molothrus ater). The obviously well fed fledgling cowbird parked itself in our yard for over a week. From sun up till sun down, squawking loudly with its mouth held wide open, three Song Sparrows ran themselves ragged feeding it safflower seeds. 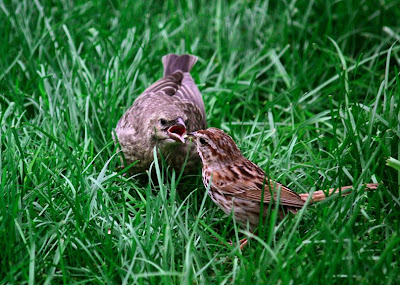 Lovely russet-streaked plumage, brown-cap, streaked-eye, and clear bird songs give clues to identifying the Song Sparrow. Its song is sweet and performed at all hours of the day, from early spring through our Indian summer. They are one of the most common and geographically variable birds found in North America, breeding as far north as Canada and Alaska and wintering in Mexico. Not all Song Sparrows are migratory. For the past few winters we have had several residing in our garden all the winter long. Their diet usually consists of seeds, grains, berries, and less frequently, insects. We find them feeding in a solitary fashion on the ground below both the safflower and Nyjer seed feeders.

The Brown-headed Cowbird is a brood parasite, meaning it lays its eggs in the nests of other passerines (perching birds), neither building its own nest nor raising its young. Females lay as many as three dozen eggs in a season and over 140 different species of birds have been known to raise their nestlings.

Brown-headed Cowbirds were originally nomadic, foraging on the insects and prairie seeds churned up by the vast herds of bison during their annual northward and southward migration across the Great Plains. Nearly extirpated, the bison were replaced by goats, sheep, and cattle, with which the cowbirds became associated, hence the name cowbird. As the North American landscape has become increasingly fragmented through deforestation, the Brown-headed Cowbird has experienced a massive range expansion.

Cowbird young tend to hatch earlier, grow faster, crowd-out, and reduce the food intake of their hosts. Some species have learned to recognize and reject cowbird eggs — robins, blue jays, catbirds, and brown thrashers, for example. Species that accept the cowbird eggs include many warblers, vireos, Eastern Phoebes, and Song Sparrows. The spotting pattern of the Song Sparrow egg is similar to that of the cowbird. Brood parasitism is a dramatic example of avian co-evolution. Brown-headed Cowbirds have their most damaging impact on species such as the Kirtland’s Warblers, which have only recently been subjected to cowbird parasitism and have not yet evolved defense mechanisms.

Since World War II, the decline of forest songbird populations over much of North America has increased rapidly and the reasons are many. Brood parasitism by Brown-headed Cowbirds was considered by many to be the chief cause. The primary determinant is not brood parasitism, as was demonstrated by an extensive study conducted by Audubon scientists (cowbirds are also declining in numbers), but habitat fragmentation. Perhaps the loss of songbirds could be halted if their survival depended entirely on conservation efforts in the United States and Canada. However, it is the inexorable destruction of tropical rain forests (the songbirds winter habitat) that, if continued unabated, in only a few years will drive many of our beloved songbirds to extinction. The most enduring action we can take to ensure a future for all living creatures is to properly manage the scale of human activities on our planet. 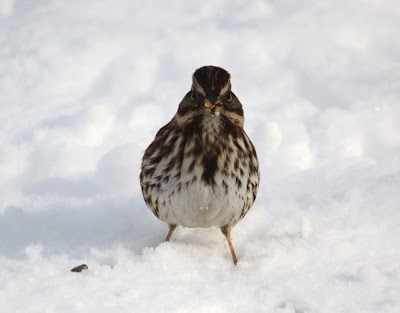