We all feel lost at times, and Wesley McNair helps reground us with his newly released book of poems, The Lost Child, Ozark Poems. 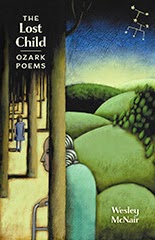