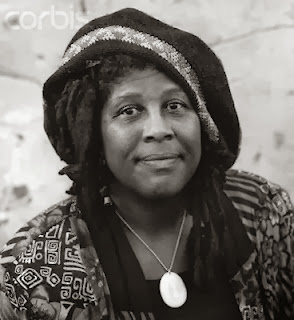 Sad news: Black Sparrow author Wanda Coleman, the "unofficial Poet Laureate of Los Angeles" passed away on Friday.  She was the author of more than twenty books, and was awarded the Lenore Marshall National Poetry Prize for Bathwater Wine.  She was also a finalist for the National Book Award with Mercurochrome.  Her other works include Jazz and Twelve O'Clock Tales, Native in a Strange Land, A War of Eyes and Other Stories, Mambo Hips and Make Believe, and The Riot Inside Me.

"Words seem inadequate in expressing the anger and outrage I feel at the persistent racism that permeates every aspect of black American life. Since words are what I am best at, I concern myself with this as an urban actuality as best I can." Coleman once told Contemporary Authors.  She was "most eloquent in poems, illuminating the ironies and despair in a poor black woman's daily struggle for dignity but also writing tenderly and with humor about identity, tangled love, California winters and her working-class parents," Elaine Woo wrote in the L.A. Times obituary. We've posted some excerpts from her poems below.

this is the side i am forever on

arms were taken up at Avalon & Manchester
on a school ground two score & five years ago
i am still fighting the absent horde
of fairer-skinned mockers
who would not play with me because i was too dark
who stole my revengeful reports to God
& passed them around
& my writings caused so much disruption &
hurt so many mean little feelins that the
white teacher man had to intercede
to quell the violence, to dab away the angry tear
remove the fists from my hard-pressed head
then when, skirts flying, they had returned
to 4-square and double dutch
he took me aside privately, stared at me
with those great wide gray eyes
then laughed, said i had quite a gift
to keep such papers at home or face
the principal & suspension & that some day,
if i had the convition & the courage
i'd give something great back to my people

And also from Bathwater Wine, a poem entitled "Letter to my Older Sister,"  for her sister who died in childbirth:

"in the morning i'm greeted by
talking leaves and ghost mushrooms
and the soft mist off the coast,
the scuttlings of ring-tailed
opossums stealing food from feline
odalisques too sated to stir, the
flittings of doves on the mate
and in my reverie i seek you out
to share my favorite lullaby
it is i who sits beside you
it is i who sings from the shallows
it is i scratching against this silence"

Posted by Heather Tamarkin at 11:01 AM