David and I spent Sunday down in New York at the Brooklyn Book Fair, selling books, giving away donuts, and taking in the bibliophile atmosphere. The fair is simply a glorious event for anyone who has a decent library (or aspires to one). With over 150 booths, you could find authors, poets, publishers, bookstores, magazines, and a whole lot of free candy. David had no problem bringing in huge crowds to his booth. I can’t say this with 100% certainty, but we may well have had the most popular booth at the event. It turns out after 40+ years in the book business, you build up quite a following. Or maybe it was the free donuts we were giving out. Either way, I had a blast talking books with so many enthusiasts, who could pretty easily be divided into three categories.

The Godine regulars were the most delightful customers. They’d walk right up to me and introduce themselves, tell me how much they loved ALL of the books, and then proceed to buy a few. Since we had two stands, one on either side of the flow of traffic, I’d often get someone who’d just bought a few books from David, yet somehow could not resist getting a few more from me as well. “Oh I just LOVE his books,” they’d say as they picked up some more, “maybe just another two or three should do it.”

The families with small children were some of my most entertaining customers. I spotted more than a few children darting through the crowd as their parents attempted to shop and not lose a child at the same time. Having spotted a book that was colorful enough to look interesting, the children would suddenly make a beeline towards the table, pick up the book, and start flipping through it. Once the parent located and caught up to their kid, the following transaction was swift, and proceeded as follows:

“Do you like this book sweetie?”
“No,” the child replies as it drops the book, already concentrating on the free stickers in the next booth over, the slightly haggard parent following swiftly behind.

Or this: “Do you like the book sweetie?”
“Yeaaaah!”
“Okay,” turning to me, “How much?”
Apparently parents will finance their child’s love of books at any cost. Haggling was off the table! 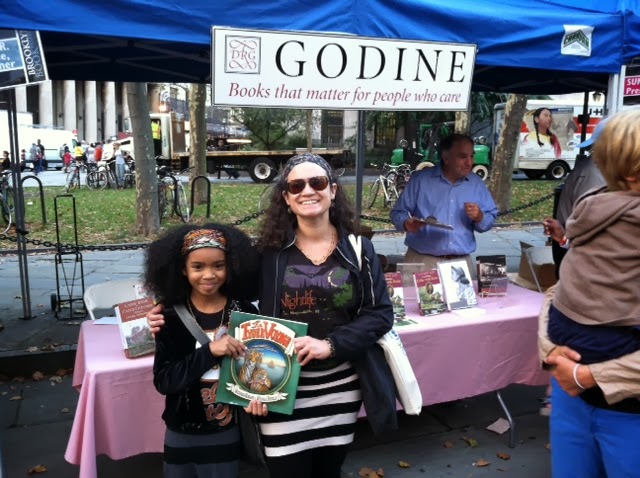 Most people did not fall into either of those enthusiastic categories. They would sidle in, spend some time scanning the books, running their fingers over them, showing interest but not giving themselves away completely. They were drawn in by the site of so many fresh books, sprawled all over the table, waiting to be devoured by hungry eyes. Some moved quickly, but most lingered for awhile, testing the first sentence, reading the jacket again, turning the book over in their hands to just get a sense of how it feels. These were my favorite people. These people appreciate books, thus they REALLY appreciate Godine. They just don’t know it yet. David so effortlessly targeted their tastes and picked the perfect book off the table for them, charged half the price and then threw another book in for free. No wonder his stand was so popular…and at the end of the day, there are a few more Godine enthusiasts out in the world.
Posted by Staff at David R. Godine at 1:47 PM