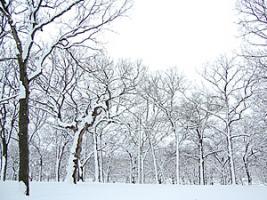 Scandinavian winters last at least seven months. I should know, I’ve experienced them firsthand. The first snow drifts down in early November as the temperature drops and the ground becomes hard and frozen. By December, temperatures have fallen well below -20°, and at that point it doesn’t much matter if it’s Celsius or Fahrenheit. Add in a chilling north wind and the cold cuts right to the bone. Snow begins to pile up, first inch-by-inch and then foot-by-foot. Then, for months, the land is buried, alternatingly attacked by blizzards and frost with no end in sight. The people who live there settle in; this land creates those who can withstand. Long after the rest of the world would have resigned themselves to despair, the Scandinavians continue about their daily lives. Sometimes they even dare to have fun outdoors when the wind lets up. People always ask how anyone can live up there. I tell everyone the same thing: there is a quiet beauty where you least expect it.

Hardly anyone ever gets to see the first of the dawn light making a frosted tree glisten in the sun. Few people experience the complete and heavy silence a fresh snowfall brings to a forest. Almost no one stands to admire the stark beauty of a frozen, white, open field for as far as the eye can see. The people that live here reflect their land. They embody this indomitable force that allows them to endure. Most people call them stoic; indifferent to emotion. I call them quiet. Their affects are reduced, in the sense that they display fewer emotions but the emotions are all the more powerful for it.

Stig Dagerman’s collection of short stories, Sleet, embodies the unexpected contrast found so often in the Scandinavian culture. The first story, “To Kill a Child”, is written with an almost extreme emotional detachment that belies that tragic content of the story. Author Graham Green commented, “Dagerman wrote with a beautiful objectivity. Instead of emotive phrases, he uses choice facts, like bricks, to construct an emotion.”  The factual account of the actions leading up to the child’s death in the story contrasts with the building horror that the story, as a whole, evokes. He makes his characters real; they lend credibility to the stories that are more than possible, while at the same time unimaginable.

Some may call Dagerman’s writing stoic. There is most certainly an indifference to his writing, considering the sensitive content. I would call his writing quietly beautiful. The reduced emotional voice of the narrator summons a stronger emotional response from story. The subtly powerful and harshly beautiful influences of Scandinavian culture reveal themselves in Dagerman’s haunting collection of short stories.

Sleet is now available for sale on our website; you can find more information about the collection here.

Leave comments below or join us on Twitter @GodinePub.