This past week, from May 29 to June 1, BookExpo America (BEA) was held in New York City. And who, you may ask, was lucky enough to go this year with the excellent staff at Godine? This intern! Needless to say, I was thrilled. As a major industry event, I had heard of BEA before (though, I must admit, I was initially a bit lost when people starting throwing the abbreviation around). BEA is a publishing trade show, where everyone gathers together and checks out each other’s work. Publishers get together with booksellers to make sales, and in the last couple of years the public has been permitted to attend on the last day. (For more information on BEA in general, visit bookexpoamerica.com.)

I joined the staff on Saturday, June 1, for my first taste of BEA. Getting a little lost in NYC and struggling to figure out the subway system were, apparently, included in the package. After finding my way to the convention center with only a modicum of trouble, I picked up my badge and entered the huge glass building with feelings of awe and a little trepidation that quickly faded to excitement. Booths, banners, and bustling people met my eye, a sea of them surrounding me in every direction. It was overwhelming: where to begin? I hitched my tote bag (I had come prepared) up onto my shoulder, took a deep breath, and set out.

I explored booth by booth, stopping to talk to people, look at displays, and collect the many freebies being handed out. Seeing the way that “publishing people” interacted with one another was fascinating, and underscored how small of an industry this really is, in that everyone knows everyone else. Forget six degrees of separation; in publishing, it’s more like one or two. Everyone’s booths were set up to display their best titles and projects, and books were everywhere. Stacks of books, shelves of books, books on the floor in both intricate designs and haphazard piles.


I felt a sense of kinship with my fellow literary people, many of whom wore book-related t-shirts such as “Stay Calm and Love Books,” or the Lemony Snicket tee that someone was handing out. Almost all of them, including me, were carting around huge stacks of books. You see, everyone at BEA gives you books. Sure, there are other give-aways, like pins, stickers, pens, t-shirts, the ever-useful tote bag, and even a lunar calendar, but books are the meat and potatoes. Many publishers hand out free galleys, or unpolished copies of books before they’re published. They often say, “Uncorrected Proof, Not for Sale” in big red letters on the cover, and have an outline of the marketing plan on the back. These are the books that get sent out to reviewers, and these are the books that are handed out en masse at BEA. 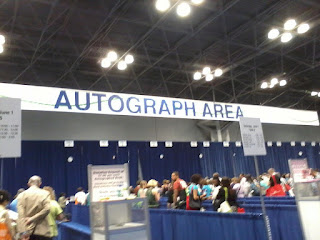 It feels amazing to get to read something before it’s released, and even more so when you’re able to get your galley signed by the author. One of the coolest parts of BEA was all of the authors hanging out around their publisher’s booth or the autographing area. I got a few of my galleys signed, one of which I’m particularly excited about. Never Fade, Alexandra Bracken’s sequel to The Darkest Minds, isn’t due out until October. Not only am I reading it early, but I also met Alexandra Bracken. How great is that? I’m also eagerly looking forward to reading Thomas Keneally’s The Daughters of Mars, and Artis Henderson’s memoir Un-Remarried Widow, among the dozen others I acquired at BEA. I even picked up a little something for my parents: When Will My Grown-Up Kid Grow Up? Loving and Understanding Your Emerging Adult, by Jeffrey Jensen Arnett and Elizabeth Fishel. Overall, my first BEA experience was incredible, and I can only hope that I’ll be able to go again in the future.

What authors would you love to meet? Are there any book releases you’re anxiously counting down towards? Leave a comment telling us which Godine books you would want to check out at our BEA booth, or send a tweet @GodinePub on Twitter!
Posted by Staff at David R. Godine at 1:11 PM