Crime and Puzzlement 2 - The App! 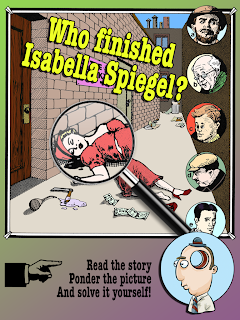 We are very pleased today to announce that Crime and Puzzlement 2 is now downloadable in app form, and for only $1.99! The sequel to Crime & Puzzlement by award-winning mystery author Lawrence Treat lets you again match your detecting powers in 24 brand new cases, available for the iPhone (including full compatibility with iPhone 5 / iOS 6) and iPad (incl. iPad Mini).

Alone (or was he?) in his locked room. Torrick the truckdriver succumbed, but to what, and why? Arthur, on his way downstairs for another drink, slipped, or did he? Siegfried Jones was obviously knifed on his way to the operation room, but by whom?

With the applause for Crime and Puzzlement still ringing in his ears, Lawrence Treat has conjured up an even more addictive and fiendishly delightful encore. Who finished Isabelle Spiegel? Why did Mr. Grange topple dead from his saddle, and what was the catch in Mr. Fishhead's alibi? It's up to you, the armchair detective, to find out!

Watch a video of the app in action:

Here are some screenshots: 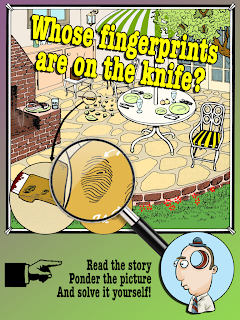 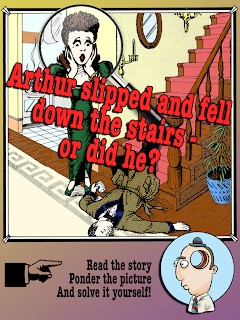 Down the app from the iTunes app store here – it's available in English, Spanish, French, German, and Japanese!
Posted by Staff at David R. Godine at 12:05 PM