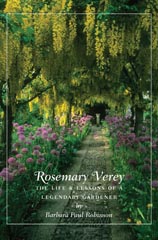 Barbara Paul Robinson, author of Rosemary Verey: The Life & Lessons of a Legendary Gardener, was featured on Ken Druse's "Real Dirt" radio show on Friday! You can listen to the podcast on Ken Druse's website, here.

From the article accompanying the podcast:


The gardens Barbara Paul Robinson has created with her husband, the painter Charles Robinson, have become quite well known. But when they bought their 18th century weekend house in the northwest corner of Connecticut in 1971, the idea was to just do some “tidying up.” But Charles began a vegetable patch. It was the miracle of sprouting seeds that awakened a passion in Barbara she didn’t even realize was there.

In 1991, Barbara took a one-month sabbatical from her position as a partner in a New York City law firm to go to England to work for the late designer and author Rosemary Verey at the world famous gardens of Barnsley House in the heart of the Cotswolds. Not only did Barbara learn at the side of Mrs. Verey, they became lifelong friends until the end of her life in 2001. (Robinson with Verey at her eightieth birthday celebration – photo Charles Robinson.)

“There was nothing low-maintenance…about Rosemary’s style of gardening,” writes Barbara. “In her view, good gardening meant hard work: the garden was to be watched and managed every day with careful attention to dead-heading and tidying. Hers was a high maintenance approach that required careful planning and strict adherence to a schedule of ongoing planting, pruning, lifting, and replanting to keep the garden looking beautiful throughout the year.”

Barbara Robinson has written a biography of her mentor – Rosemary Verey: The Life & Lessons of a Legendary Gardener, which was published by David R. Godine in 2012. Mrs. Verey began making her garden in middle age (above, photo by Jerry Harpur). As an economic necessity after the death of her husband, David, she started to write for newspapers, magazine and books. In 1980, at the age of 62, she published her first of 18 books, The English Woman’s Garden, with Alvilde Lees-Milne. Her other works include The American Woman’s Garden, The Scented Garden and The Garden in Winter.

Despite being a self-taught amateur, Rosemary Verey became sought after as a garden designer, planning gardens for luminaries like Oscar de la Renta, Sir Elton John and His Royal Highness the Prince of Wales, who became a close friend. One month before her death, she was designing a garden in Kentucky. She loved America (and America loved her).

You can buy a copy of Rosemary Verey on the Godine website, as a Google ebook, or at a retailer near you.
Posted by Kristin Brodeur at 3:52 PM