The Fo'c'sle in the Wall Street Journal! 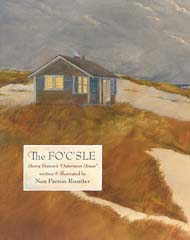 Our new title The Fo'c'sle: Henry Beston's "Outermost House" written and illustrated by Nan Parson Rossiter is the lead children's review in the Wall Street Journal this weekend!

In 1926, the naturalist Henry Beston lived for a year in Thoreau-like solitude on a Cape Cod dune overlooking the Atlantic. He spent his days observing the rhythms of his environment and recording his impressions in a journal that would be published in 1928 as "The Outermost House." That was the name local people had given to Beston's snug dwelling, a tiny house with 10 windows that made it, he wrote, "something rather like an indoors out of doors."

In autumn, he marked the southward passage of migratory birds. In winter, he opened a welcoming door to surfmen who patrolled the shoreline. We see him beside a campfire, a human speck against a great tableau of foaming sea and starry sky: "Beyond the crackling, salt-yellow, driftwood flame," Beston wrote, in one of several excerpts from his journal here, "over the pyramid of barrel staves, broken boards, and old sticks all atwist with climbing fire, the unseen ocean thunders and booms, the breaker sounding hollow as it falls." Some picture books seek to educate, some to excite; this one feels like a restful pause.
Posted by Carrie Dieringer at 1:24 PM