Bicycle proponents around the world are taking notice of Jane Jacobs, urban writer – and cyclist. In Toronto, bicycle-artist and bicycle-activist, Janet Attard (aka “Janet Bike Girl”) has installed a visual display of Genius of Common Sense at the entrance to her studio at 401 Richmond Street West. Toronto bike activists admire Jane Jacobs not only for all she did to further sensible treatment of their city, but also for her steadfast preference for bicycles instead of cars.

For years, in all but the most inclement weather, Jane Jacobs rode her bicycle to work in New York City — from her West Village home to her office at Architectural Forum magazine in Rockefeller Center — through almost three miles of city traffic. In her books, articles, and speech, she railed against cities pandering to the automobile by widening streets and building highways. She never obtained a driver’s license or even learned to drive a car. When she moved to Toronto in 1968, she continued to bike around the city. After breaking her wrist in a fall at home, she reluctantly gave up bike-riding to avoid more broken bones. Jane said she envied the Dutch queens Juliana and Wilhelmina who rode their bikes until very old age. 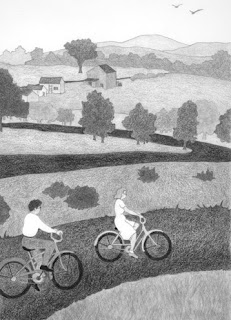 Using only images having to do with bicycles, Janet Attard designs beautiful stenciled graphics on paper, cloth, and acetate, portraying individual bikes, generic and famous cyclists, bicycle-related words, or patterns of repeating bicycles. She also collects images of bicycles. In Genius of Common Sense, Janet was happy to find a photo of Jane riding her bike to work and an illustration of Jane and Bob Jacobs on their 1944 honeymoon bicycle-trip, thus learning of Jane’s love of bicycles — but she also found Jane to be an inspirational figure in many other ways. In time for Toronto’s Bike Month, Janet created a display with illustrations from and information about the book to convey her enthusiasm for Jane Jacobs and Genius to bike lovers and numerous sundry visitors to 401 Richmond from near and far.

Janet’s studio is part of a nineteenth-century industrial building rehabilitated by Jane Jacobs’s longtime friend, Margie Zeidler of Urbanspace Property Group. Providing a vibrant creative environment for over 140 artists and micro-entrepreneurs, 401Richmond houses a community reinforced by a newsletter, tenant get-togethers, and communal spaces. The re-tooled building itself embodies the ideas of Jane Jacobs with its mixed uses combining business and the arts along with a strong sense of community. On a brick wall in one of the stairwells hangs a large painting of Jane Jacobs.

Toronto’s cycling community can look forward to an article about Genius of Common Sense scheduled to appear in spring 2011 in Dandyhorse, the magazine for Toronto's urban cyclists.
Posted by Daniel Pritchard at 10:40 AM