“So it’s OK to be obstreperous,” Kathleen Wynne, Ontario’s Minister of Education, announced to a group of Toronto high school students. “And there are lots of people in this room who know it’s OK to be obstreperous,” she added, referring to the many activist friends and fans of Jane Jacobs also attending the Canadian launch of Genius of Common Sense: Jane Jacobs and the Story of The Death and Life of Great American Cities.

In the large gallery space of a nineteenth-century industrial building, beautifully refurbished by Margie Zeidler — of Urbanspace Property Group — for artists, non-profits, and micro-entrepreneurs, the convivial crowd was in high spirits as they celebrated the theme of “author-activist Jane Jacobs for a new generation.”

Emcee of the event, Minister Wynne had just read the opening passage of this new book, aimed largely at young adults, in which the obstreperous young Jane had once again challenged her fourth-grade teacher’s contentions. Wynne’s exhortation met with delighted laughter from young and old alike. “We’re here because we all loved Jane, we all love cities, and we all think they are important living things,” Wynne declared to many of Toronto’s movers and shakers, along with teenagers from such intensely urban neighborhoods as St. James Town, Flemingdon Park, and Scarborough. 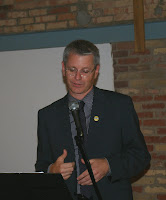 Toronto City Councillor Adam Vaughan followed the charismatic Wynne, “What I wouldn’t have given as a student at your age to have the Minister of Education give me permission to be — I’ll use a shorter word because I always pronounce that one wrong — a troublemaker,” he said to more laughter. “You have her permission. That is like real power when you are students.”

Vaughan described his fond childhood memories of afternoons at Jane’s house, accompanying his architect father (they first met when Jacobs moved to Toronto in 1968). “What I remember . . . is the endless flow of conversation and ideas and observations and challenges and arguments and disagreements. All respectful. Not quite as defiant as with her teacher. All inquisitive ideas about how cities work, how they build, how they grow, and how they move forward.” The Councilor explained that Jane had changed the way his father looked at the city. “And, as a result, it changed the way I looked at the city.”

“What’s brilliant about Genius of Common Sense,” Vaughan continued, is that “without missing a beat, without simplifying in any way, shape, or form, but by making ideas digestible in sizes that are useful in a classroom, useful to children, it gives them the right, the responsibility, the opportunity to start thinking about how their city works — for them, against them, instead of them, with them. This is a truly revolutionary gesture on behalf of the people who dreamed up delivering Jane’s ideas — the ideas that she worked on with so many in this room — to children.”

The Councilor reached a crescendo, urging the students to take the books to their teachers and school libraries and get involved in civic issues: “One of the challenges we have in the city is to make sure that you as young people are troublemakers. The trouble you make is the trouble we have to find solutions to. So when your housing isn’t right, when the trip to school is too long, when lunch isn’t hot at school . . . and all these sorts of challenges mount up . . . you identify them as problems . . . If we don’t work together with you to solve them, we haven’t read Genius of Common Sense. That’s the magic of this book.”

Education Minister Wynne read two more sections from the book — about the “sidewalk ballet” and cities as the crux of so many subjects. She asked the students what they liked and didn’t like about their neighborhoods, how they felt about busy versus empty streets, or dark streets. Many of these young people had been thinking about cities, and some had worked to create an annual exploratory “Jane’s Walk” of their neighborhood in Jacobs’s honor. One teenage boy contemplated his neighborhood: “I live in St. James Town, and our community is actually one of the most diverse and most dense communities in North America. So it’s really, really amazing to have the entire world represented in one community. I think that’s the biggest thing our community has.” The audience clapped and cheered in response.

“The people who had the idea to write this great book are here with us,” Wynne went on. “We’re very lucky. You guys are all going to get a copy of the book, and the authors are going to sign them. . . . So if you were going to explain to your teacher tomorrow, why would it be important to read this book in your class?”

“As high school students,” a girl offered, “teachers try to keep us in control and not let us be rebellious. But listening to students is very important, so this book hopefully will help teachers realize that even us young ones can make a difference, no matter how rebellious we might be getting.” The crowd erupted in enthusiastic applause.

Minister Wynne thanked the students for their insights, reminded them that Jane did raise her hand in class, and concluded the event: “We’re so lucky that Jane lived, and so lucky to have this book.”

[Glenna Lang is the author of Genius of Common Sense as well as several other titles from Godine.]
Posted by Daniel Pritchard at 11:56 AM