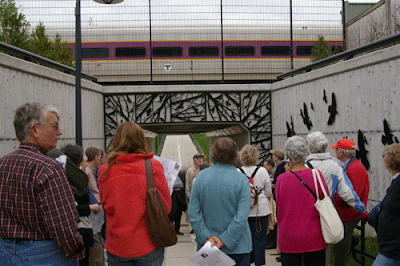 I'm still coming down from my Jane's Walk high. It was truly an exhilarating experience.

A couple months ago, Jane’s Walk USA asked us, the authors of Genius of Common Sense: Jane Jacobs and the Story of Death and Life of Great American Cities, if we might organize a walk in our city. Begun in Canada the year after Jane died in 2006, the walks honor the memory and spirit of author and urban activist Jane Jacobs on the weekend closest to her birthday on May 4. According to Janeswalk.org, the walks offer "a street-level celebration of Jane Jacobs ideas and legacy."

This Saturday, our Jane's Walk here in Cambridge, Massachusetts, was a smashing success. We had chosen an urban fringe area on both sides of the railroad tracks between Porter Square and Sherman Street in North Cambridge. Within the last ten or fifteen years, these once crime-ridden, semi-industrial streets have sprouted attractive infill construction and gone through major rehab and reuse of old buildings.

We had forty enthusiastic walkers — many were longtime fans of Jane. And we were thrilled to have Jane's niece and nephew, Nancy and Robin McBride, as well as city councilor Henrietta Davis, former mayor Frank Duehay, and Michael Kenney, reporter from the Boston Globe. Charles Sullivan, the head of the city’s historical commission led us, brilliantly providing historical background, maps, and Winslow Homer’s 1859 engraving of a view along the tracks of Cambridge’s cattle market.

As we walked by a large co-housing project, a resident putting in her “sweat equity” took time from her gardening to describe life in an “intentional community.” One of our walkers, who lived in a converted broom factory that we passed on our route, invited us to see her glorious enclosed garden bordering the tracks. We also unexpectedly bumped into and heard insider views of the neighborhood from Joanna Malenfant, daughter of the late Geneva Malenfant whom Charlie Sullivan called “Cambridge’s own Jane Jacobs.”

Back in Porter Square, a large group of us wound things up at Christopher’s restaurant, not quite Jane’s White Horse Tavern on Hudson Street, but nevertheless an old neighborhood establishment in a nineteenth-century building. We sipped and ate and continued conversation.

The whole event was truly a blast, with its serendipity and lively discussion among the walkers. We loved gathering a group of folks for the sole purpose of strolling through a more-or-less ordinary neighborhood for a little urban exploration and contemplation.

Yes, the walk should certainly be the first of many. It far exceeded any of our expectations — in turn-out, chance encounters, and enjoyment.

Max Allen, a Jane’s Walk organizer in Toronto, had emailed on Friday that there were going to be 140 Walks in that city alone. Other Canadian cities boast many. American cities joined in this year. This feels like the beginning — or continuation — of a movement. Hats off to Jane Jacobs and her books!

[The author of this post is Glenna Lang, co-author of Genius of Common Sense, as well as several other Godine titles.]
Posted by Daniel Pritchard at 2:07 PM